“Like our best travel writers—Bryson, Heat Moon, Strayed, and Frazier come to mind—Dobson is good company: irreverent, funny, wise.” —Gregory Martin, associate professor of English at the University of New Mexico and author of Mountain City and Stories for Boys

“Part travelogue, part social commentary, Dobson narrates a gritty and multidimensional tale, even as his descriptions of the landscape and the river are as warm as the summer sun. It was a journey I didn’t want to end.” —Sandra Moran, anthropologist and award-winning author of Letters Never Sent and Nudge

“This is a work of strength and beauty, of care and courage. Patrick Dobson’s voyage down the length of the Missouri River is not simply one of self-discovery, but a journey that allows the reader to look inward as well. . . . We are fortunate to be able to share in his odyssey of exuberance and discovery.” —Alan Boye, author of Just Walking the Hills of Vermont and Sustainable Compromises 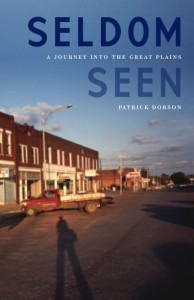 “Lighting out for the territories—as Mark Twain would have put it—Patrick Dobson discovers his country, his neighbors, himself. Peter Jenkins (A Walk Across America) meets Robert Pirsig (Zen and the Art of Motorcycle Maintenance). Seldom Seen inspires the adventurer in me—as it should all of us—to go out and do something similar.” —
Eddy Harris, critically acclaimed author of Mississippi Solo: A River Quest, Native Stranger: A Black American’s Journey into the Heart of Africa, South of Haunted Dreams, and Still Life in Harlem

“With open eyes and open heart, Patrick Dobson shows us the heart of the nation.” —David Shribman, executive editor of the Pittsburgh Post-Gazette; and syndicated columnist with Universal Press

“This intimate search for self-discovery and renewal (in Seldom Seen) is so well told, you’ll smell the dew on the morning grass, and you’ll know you’ve found something truly delicious. I’ve put in more than 100,000 miles, some on these very highways. Dobson paints a clearer portrait with words than I ever captured with cameras. Bravo!” —Michael Murphy, Kansas City Public Television (KCPT Channel 19) producer and host of Rare Visions and Roadside Visions

“This isn’t a book about the author’s personal musings on the road, but rather a chronicle of the folks that, despite a lack of virtually everything except endless space, have decided to live on the prairie. More surprisingly, these people-the former carnival worker in Wyoming, the evangelicals in Kansas, the would-be rock star in Nebraska-were eager to let Dobson into their lives. The prairie, lovingly described by the author, becomes the fabric that holds these people together. Their stories, some as violent and powerful as a Midwestern thunderstorm, others as calm as a breeze, create a captivating narrative, and Dobson finds the common humanity that keeps people struggling against their circumstances and striving to succeed, in whatever form that may take. Restrained storytelling and a string of charming, relatable characters make the prairie seem like much more than a flyover region.” —Kirkus Reviews